Klaus Schweinberg warns in business newspaper Handelsblatt against the threat of rising populism in Germany, drawing parallels between the developments in Germany, Great Britain, France and the United States. Germans, and the young in particular, are losing interest in the democratic process. The state must teach them that it is their civic duty – and in their interests – to participate, says Klaus Schweinsberg.

Business newspaper Handelsblatt reports on the rising threat of hacks aimed at elections and the cyber attack simulation conducted by Prof. Klaus Schweinsberg and Prof. Marco Gercke, cybercrime research institute, at the Munich Security Conference. Klaus Schweinsberg and Marco Gercke ran the simulation in which a fictional European nation faces a cyber attack aimed at its elections. The simulation was attended by interior and defense ministers from a host of nations. “It always comes down to whether or not those in positions of power have grappled with how to react immediately in a crisis situation,” the experts said in the article. 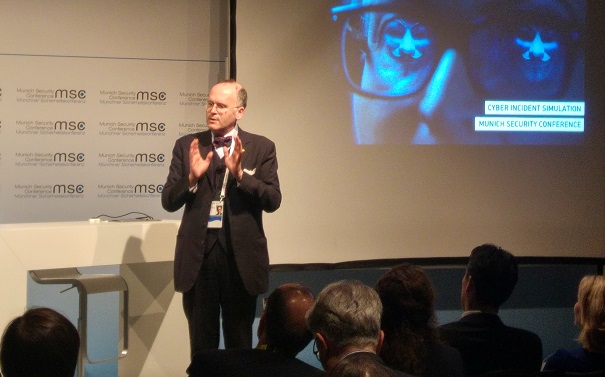 “Responsive and Responsible Leadership” was the theme of the World Economic Forum Annual Meeting 2017. Many topics covered in Davos were not new, such as the subject of migration, which Antonio Guterres, now United Nations Secretary-General, and Professor Klaus Schweinsberg discussed in great detail several years ago. What was new, however, is the dramatic and powerful impact this topic has on the courses of the world. In an interview with german news channel n-tv, Professor Schweinsberg described the sentiment in Davos: “Europa is silent, USA is ranting and the Chinese State President has shown very clearly that he wants to lead.”

to the n-tv Interview (in german)

They are the often-quoted backbone of the German economy: Family-owned businesses. Among their major strength are clear structures and short decision processes. But a lack of succession arrangements and quarrels could jeopardise the success of the businesses. “There is often a lack of professional distance. The parties involved should seek expert advice.” says Prof. Klaus Schweinsberg in the german newspaper Rheinische Post.

to the article (in german)

Simone Bagel-Trah, Chairman of the board at Henkel, talks in an interview with manager magazine about this year’s massive decline of her company in the Board Diversity Index (BoDI). The index, authored by Klaus Schweinsberg, analyses the results of supervisory board elections since 2013 with special regards to diversity and plurality of offices. One of the findings of the Board Diversity Index is that Henkel, by comparison to the preceading year, has slipped down four points in the ranking. With only eight points in total Henkel shows a lack of diversity.

To the article (in german)